Survivor: A TV Ritual You Should Watch

Worth Watching Each Week


Being a parent, at least for my wife and I, means that we aren’t current on a lot of television. In fact, we are only current on two television shows aired on network TV. (I’m current on Agents of S.H.I.E.L.D., but Meghan doesn’t watch it.) The Big Bang Theory is in its final season. The other also airs on CBS and it’s a show we hope will never end. If you’ve never watched a minute of the hit television series, Survivor, then you’re missing out. Not only is this reality TV show heading into its 38th season, it is doing so on the simple premise of being too good not to watch.


I started watching the first few seasons with my parents. After some jobs and then college, Survivor fell off my radar. It was somewhere around Season 21 that I started watching every single week. Fortunately, I was able to backtrack on Amazon Prime to watch the 12th through 20th seasons.

Survivor is led by Jeff Probst, one of the most charismatic individuals I’ve seen on TV. He is seemingly able to talk to anyone at any time, regardless of their condition. They can be happy, sad, exhausted, injured and with the medical team, or sitting down with a tribe at Tribal Council. Make no mistakes, Probst is the compass pointing viewers in the right direction of where the story might lead. Watching Survivor live every week during a season is a ritual, because you get to watch Probst prod and poke as he tries to find where each player is at each moment of the game.

If Probst is the compass, castaways are doing their best to stay away from his pointed questions. They’re also hoping to discretely stab their fellow contestants in the back. The players are absolutely fascinating to watch. They are thrown into a massively crazy experiment where you’re essentially lost on an island with the bare necessities. The only hope they have is to build enough trust with enough people to survive until the next vote. Generally speaking, there is usually one vote-out per episode, and that’s the key to winning the game. How do you maximize your staying power from week to week?


Being a leader early on puts the spotlight on your decisions, making an easy target for anyone that either wants to be the leader or wants to avoid being on the bottom. It’s a murky balance to avoid being on the bottom, while not being the glaring person on top. It’s always a strange thing for contestants to blame other players for “riding coattails” or coasting in the middle. Yes, perception is a huge factor on who wins and who doesn’t, but eventually, players are trying to stay in the middle to survive Survivor.

It’s possibly why Survivor is one of the greatest games ever played. You’re witnessing people at their most vulnerable, while attempting to maneuver themselves to a win on day 39. Oh, did I mention the grand prize is one million dollars? How do you believe someone on day 1 and then hope they’ll be by your side on day 4, let alone day 34? The ability to achieve a perfect balance in Survivor is possibly the hardest thing to achieve, because any perceived “threat” of winning the game will make anyone a target, at any time.

Cheering for Season 38 and Beyond


Along with seeing good or bad strategy play out, there are enormously entertaining obstacles. You might actually think, like I did last season, “How can anyone stand on a small perch for six hours?!” Not only did my back twinge at the thought, my feet started to cramp as I watched an Immunity Challenge. Christian Hubicki from David vs. Goliath (Season 37) stood on a small ledge for six hours and won! The level at which these contestants compete, both physically and mentally, is astounding to watch. It’s the very nature of the show that’s so thrilling – sit back in relief as someone you like is being saved from the vote or you’re jumping up and down in shock as a player gets sent home early.

If you’re interested in watching a show that will grab you enough to where you’ll follow along (forever), you will check out the upcoming season, Survivor: Edge of Extinction, which premieres on Wednesday, February 20 at 8pm.

"Never Gonna Give ['The Sequels'] Up" 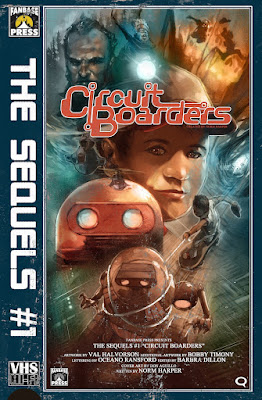 I really enjoyed The Sequels #1. The premise behind the story is so unique ⏤ trying to find normalcy after having a crazy childhood adventure. The story flows extremely well; showing the adventure, the repercussions from the fallout, and then how that affected Avery's life. It totally has that 80s vibe with the adventure early on, but it totally translates well to present day. I think it's hard to talk about our internal struggles, regardless of the reason, and The Sequels highlights how lonely life can be and the importance of talking about our issues.

I am really looking forward to see what happens next. I actually think Avery and his new friends talking about their adventures would set them on a path to getting over the let down feeling in their lives. Now, I'm wondering how they'll feel after going on another adventure. When it's all said and done, will they go back to that feeling that led them to that support group, or will a new adventure provide a spark that also helps them.

The artwork seems to match the story perfectly ⏤ it blends so well from panel to panel. The darker shading, the colors, it's almost like they match the mood of the character as he's telling his story. The campfire scene is absolutely splendid. This story works so well. I love the unique perspective to highlight one's own misery and then providing a spark. The spark of life is the support group. The adventure is the surprise. And who is the guy who handed out the card?!


This brief review was brought to you by a very geeky parent.


The Sequels Issue 1 is available for pre-order now.