Welcome back for another chapter of New Middleport: The Senses of Weiland Kershaw. My last blog included chapter one and here is chapter two for your enjoyment. 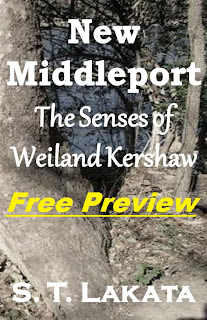 “Knock it off Sam!” whispers Lizzy.
“Take it easy sis.  I can’t help it if I want to take charge of this city and turn the rulers into puppets.”
“It’s no wonder that you talk like a child, because you are still waiting to grow up.  What if someone hears you?”

The apartment is filled with coal dust.  Sam finally takes a seat in the musty chair near the window and submits his quietness with a sigh.  It’s been a long shift and there’s no memory of the last day he had off.  Talking never did seem to be so threatening to him, and working endlessly for little food was a much better prospect then missing work and getting lashed.  Working was also the best way to keep his sister from the dangers of the city or having to work herself.

“Tails,” he calls trying to end a fight before it begins.  “Tails, you take a shower and I cook and clean.  Heads, I shower and you cook and clean.”  The simplest game between the two breaks a smile on Lizzy’s face.  She pulls the old coin from the small pocket in her jeans and gives it a flip toward the couch.  Its soft landing shows tails and Sam gets up to start the stove.

“Go ahead and shower,” Lizzy speaks.  “You’ve had a long day.  I’ll let you cook next time.”  Sam shows relief on his face, because he always seems to burn the vegetables even when they’re somewhat rotten.  “Thanks Lizzy.”

Coal drips from his hair as he dries off from the shower.  He walks around in his towel, throws on a shirt, and comes back into the living room.  “How long was I in the shower?”

Smiling her sister says, “Two minutes just as always.”  It amazes Sam how much cleaning this girl can do in such a short period of time.  Coal dust has all but disappeared from the chair he’d just been sitting in, which has always been his favorite spot to rest.  There is always coal dust around since he started in the mines two years ago, but Lizzy wants to make it feel like a home as much as possible.

“Mom and dad would be proud sis.”  The mention of their parents almost always brings tears to her eyes, but he’s never seen her shed one tear since they were killed.  Even though Sam’s been doing all the hard labor, he has always thought that she’s been the toughest.  Maybe she feels that being strong will keep the two of them together and stay a family.  Maybe she doesn’t want to show weakness by allowing herself to cry and therefore avoiding the fates of their parents.  Lizzy thinks that she will always be in control as long as her tears don’t boil over.  She has always promised Sam that she would never do to him what her mom did to their dad, “I will never end your display.  Never.”  It was comforting to Sam knowing that Lizzy would never kill him.

There’s a demonstration somewhere nearby.  I can hear the crying and despairing chants of what must be a large crowd.  It seems to be less than a mile away, so it’s still in the Lockport District.  I’ve lived in the same apartment in Lockport my entire life.  It’s possibly the poorest district of New Middleport and probably why I’ve gotten used to surviving on so little.

There are many that die of starvation in Lockport, but we’re not the only district that has this problem which is why so many join the OCP.  The rebellion has been around for as long as I can remember, but my father always told me to keep to myself to keep from getting killed.  “Being a member of the Oppressed Citizens of Port can only lead to death or worse,” he’d say.  Unfortunately, you don’t have to be a member to be caught in some of the traps posted throughout the poorest districts of Port.  Traps are put in various different places to catch supposed members of the rebellion.  These traps can be anything from stun darts to giant nets to explosive devices.  You can meet a very painful end if you’re not careful.  There have been many of all ages that I’ve encountered all throughout the city that are missing limbs and waiting for death in agonizing pain.

The rulers do make an effort to remove most of the traps during a display, so that all witnesses can understand the suffering that come to those that have been brandished as a rebel, thief, or bait.  The rulers, particularly Inna Kendrick, enjoy taunting the crowd with those that are being tortured simply as bait.  She won’t hide the fact that they’re bait.  Inna wants the crowd to save the bait and there’s only one way to do that.  The mob must turn in a member of the OCP.  The crowd doesn’t always turn, which means the bait will be killed, but bait is never let go until someone takes her place.  Bait is almost always a girl.  Some will volunteer to take a girl’s spot before the whips, blades, or scissors are even brought out.  These volunteers are usually not rebels, which makes those that aren’t members of the OCP despise the rebel cause and forget the tyranny of its leaders.

Those that hate the rebellion will usually earn more food by working for the rulers.  Enforcers are always anti-rebels.  They come in large numbers to protect the rulers, all demonstrations, and of course the transportation plant.

I see Jay before he calls out my name, “Weiland!”  Jay and Cole are already out and about today, which is a good sign that they haven’t gotten into any trouble.  “Jay.  Cole.  What’s the display?”  I could easily look around the corner of the building, but it’s a simple show of trust to let them tell me before I see it for myself.

“It’s not good W.K.  Inna’s got a pair of baiters up on stage.”  Jay’s lack of humor this morning leads me to believe this is definitely not a normal death show.  “I don’t recall there ever being more than one person on display before.  Do you?”

Cole sounds understandably nervous.  He would do anything to protect Cassidy and anything outside of the twisted normalcy we've grown accustomed to puts up an alarm for all of us.  No is the only response I give to Cole to try and present as much calm in my voice as possible.

Stay tuned for another free preview within the next week.  New Middleport: The Senses of Weiland Kershaw is available through the Kindle and Nook.